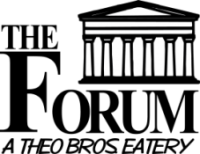 Established in 1987 by Theo Bros. Inc.
Four generations of restaurateurs for over 70 years.

Alexandria Theodosopoulos is currently a High School English teacher. She graduated with honors from Muskingum University with a Masters in Teaching and The Ohio State University with a double major; a Bachelor of Science Degree from the Fisher School of Business within Business Administration specializing in International Business, and a Bachelor of Arts degree in Psychology. Alexandria re-established the Alpha Gamma Delta Fraternity at The Ohio State University and held multiple offices. She was active in the ALD-PES Honorary Society and was a Research Assistant for the Psychology Department. As an exchange student, she traveled to Australia and Greece while visiting New Zealand and Indonesia.

Katrina Theodosopoulos graduated from The Ohio State University with a Bachelors in Zoology. She furthered her schooling to become a Software Engineer & Web Developer through MakerSquare located in Austin, Texas. She has worked in Austin, Texas as a Software Engineer then migrated back to Ohio and is currently working at Root Insurance as a Software Engineer. When she was in Middle School Katrina created a website to sell T-Shirts on CafePress: Katrina’s T-Shirts; and has never stopped creating and coding. Katrina has traveled to Costa Rica, Panama, England, Greece, Italy and France to study the culture and habitat of many different animals and species. She has worked at The Columbus Zoo, volunteered at Pets Without Parents and The Save A Dog Foundation. She is a member of the Alpha Gamma Delta Fraternity.

Raquel Theodosopoulos earned her Bachelors Degree from the University of Cincinnati within Exercise & Fitness at the top of her class with a 3.8 GPA. Got honored to lead my program out to graduation as a class marshal. Started a company from scratch; SET FIRE ATHLETICS, specializing in online CrossFit programming, Olympic Weightlifting programming, SET FIRE NUTRITION coaching and online or in person personal training. Set Fire has an Olympic Weightlifting Team and a Barbell Club. Not to mention, the most badass Set Fire gear thats sold on the website! During the pandemic in 2020 Raquel wrote an ebook for a 4 Week At Home Workout to stay fit with minimal equipment. Raquel served as a Sargent in The United States Marine Corps. serving her country to defend the freedom of all Americans. She traded her party nights for training days, her soccer cleats for combat boots and her phone for an M16 rifle. Her tenets are Duty, Honor, and Commitment in service to God, Country, and Corps. No matter the Cost; No matter the Sacrifice, Even to the last full measure; She will do her Duty. The Few. The Proud. The Marines. Semper Fidelis!

Alex & Karen
The Forum is owned and operated by Alex Theodosopoulos, whose family has been in the restaurant business since 1931. Alex grew up in a Greek household where food was the sun around which his families solar system revolved. His forefathers have handed down all the traditions and secret recipes that are part of the restaurant today. Alex didn’t start out cooking. He learned the hard way; first by cutting french fries at the age of 8 years old, then he helped bake pies, prep food and once he was old enough and strong enough he bussed the tables. Around the age of 15, Alex became one of the cooks until he left for college. He studied Business Administration at the University of Cincinnati. Once he returned home he became manager of Theo’s Restaurant. In 1986, while attending a National Greek Convention in Colorado, Alex met his soon to be wife, Karen. Karen works within Education and holds a Masters in Mathematics along with a Bachelors in Computer Science.
Alex is very particular about the quality of the food that he serves to his customers, so he looks for the freshest local ingredients that he can find. He also avoids prepackaged items and makes an abundance of homemade items from scratch. His recipes have been handed down from generation to generation to create the exquisite textures and flavors which satiate the palate. As he says, “Because life was meant to be Enjoyed!”

Once upon a time… 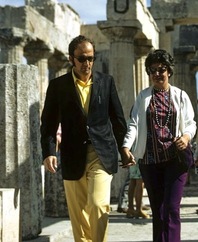 The year was 1946 two very young teenagers, Nick Theodosopoulos, 19, and Themi Granitsas, 18, met and were destine to share the rest of their lives together. Flash forward 3 years. Nick earned his Chemical Engineering Degree while working the midnight shift at the US Rubber Company. While Nick was working for Dupont in Delaware he drove to Cambridge, OH and propose to Themi, who graciously accepted.
Nick was transferred to Marquette, MI to work for JNL Steel, where their eldest son Alex was born. In 1963 Nick and Themi moved to Cambridge to partner with James Granitsas, Themi’s brother, at “The Coney Island Restaurant;” the current location of “Theo’s Restaurant.” Once James Granitsas earned his Judicial Degree a few years later, Nick bought him out and was the sole proprietor until his two son’s Alexander and Steve purchased the business from him in the 1990’s. Nick continues to work every day at the restaurant.

Copyright © 2021The Forum Restaurant. All Rights Reserved. Site Developed by AVC Technical Services
We use cookies on our website to give you the most relevant experience by remembering your preferences and repeat visits. By clicking “Accept All”, you consent to the use of ALL the cookies. However, you may visit "Cookie Settings" to provide a controlled consent.
Cookie SettingsAccept All
Manage consent

This website uses cookies to improve your experience while you navigate through the website. Out of these, the cookies that are categorized as necessary are stored on your browser as they are essential for the working of basic functionalities of the website. We also use third-party cookies that help us analyze and understand how you use this website. These cookies will be stored in your browser only with your consent. You also have the option to opt-out of these cookies. But opting out of some of these cookies may affect your browsing experience.
Necessary Always Enabled
Necessary cookies are absolutely essential for the website to function properly. These cookies ensure basic functionalities and security features of the website, anonymously.
Functional
Functional cookies help to perform certain functionalities like sharing the content of the website on social media platforms, collect feedbacks, and other third-party features.
Performance
Performance cookies are used to understand and analyze the key performance indexes of the website which helps in delivering a better user experience for the visitors.
Analytics
Analytical cookies are used to understand how visitors interact with the website. These cookies help provide information on metrics the number of visitors, bounce rate, traffic source, etc.
Advertisement
Advertisement cookies are used to provide visitors with relevant ads and marketing campaigns. These cookies track visitors across websites and collect information to provide customized ads.
Others
Other uncategorized cookies are those that are being analyzed and have not been classified into a category as yet.
SAVE & ACCEPT